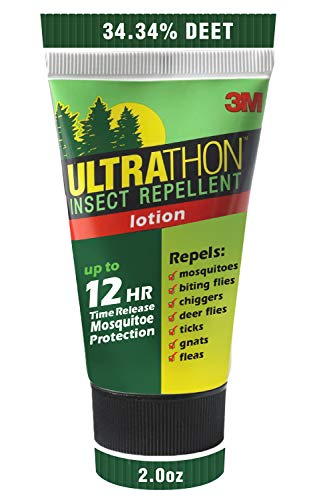 3M Ultrathon Insect Repellent Lotion and Spray uses DEET combined with a time-released formula to keep harmful bugs away for hours longer than typical sprays. Hundreds of users felt that this product was incredibly useful even in densely wooded areas where harmful insects tend to be the most prevalent. 3M Ultrathon repels numerous disease-carrying insects such as biting flies, chiggers, ticks, fleas, mosquitoes, deer flies, and gnats. Ultrathon Insect Repellent utilizes a unique controlled-release formula that works to protect you from biting insects for up to twelve hours. Many users on Amazon noted that this product exceeded their expectations.

Whether users were going on South American hiking trips or trying to enjoy their backyard, biting insects were a huge concern. 3M Ultrathon repels mosquitoes that may carry harmful diseases that can pass to humans through a simple bite. Mosquitoes alone can carry diseases such as the Zika virus, West Nile virus, dengue, and chikungunya. The repellent also works against ticks that may carry Lyme disease. These are all very preventable ailments when taking appropriate precautions. 3M Ultrathon Insect Repellent lotion uses DEET along with 3M controlled release technology to provide a continuous shield of protection against insect bites. While mosquitoes and ticks are typically the primary concern, 3M Insect repellent also repels biting flies, chiggers, gnats, fleas, and deer flies. The 3M lotion and spray not only provides superb protection against insects but also works for up to 12 hours without the need to reapply.

3M Ultrathon Insect Repellent Lotion is incredibly simple to use. All you need is a small amount to smooth across any exposed skin. Some users noted avoiding the face area, specifically the eyes, nose, and mouth. The spray, like the lotion, should be applied to any exposed areas of skin to repel mosquitoes, ticks, and other biting insects.

3M Ultrathon contains 34.34% DEET for superb protection from mosquitoes, ticks, biting flies, chiggers, and other harmful insects. Diethyltoluamide, or DEET as most know it, is a popular ingredient in many insect repellents. The repellents that contain DEET are typically the most effective. Originally, DEET was thought to work by disabling an insect’s ability to smell carbon dioxide and locate hosts. However, this theory has been disproven by more recent studies. The new evidence suggests that DEET works as an actual repellent because mosquitoes dislike the smell and avoid it.

Some users stated that the lotion’s formula became separated when exposed to high temperatures. If this happens, try shaking the tube to reincorporate the ingredients and acquire a lotion-like texture.

Some other products may require additional time before becoming fully active, but 3M Ultrathon works from the moment you apply it.

When used according to the label, 3M Ultrathon Insect Repellent Lotion is quite safe. Keep in mind that you shouldn’t use DEET products on babies or pets. The manufacturer, Ultrathon, also suggests that the lotion and spray not be applied underneath clothing. When no longer needed, Ultrathon recommends washing the product off. It should also be washed off before reapplying, if necessary. While it is usually rare, DEET can be an irritant and cause reactions on the skin. To prevent this, you should avoid using the insect repellent on broken skin or around the face. Be sure to avoid application near the eyes, mouth, and nose.

3M Ultrathon Insect Repellent is effective immediately with no need to wait for dry times. Some other products may require additional time before becoming fully active, but 3M Ultrathon works from the moment you apply it. When considering just how many positive reviews this product has, the price is quite reasonable. Many reviewers felt that a little product went a very long way.

END_OF_DOCUMENT_TOKEN_TO_BE_REPLACED END_OF_DOCUMENT_TOKEN_TO_BE_REPLACED

Advanced 3M controlled release of DEET is proven to repel mosquitoes, chiggers, ticks, fleas, and many other insects. We analyzed more than 100 reviews and found that the vast majority were extremely positive. In fact, many reviewers felt that 3M Insect Repellent far exceeded their expectations. The benefits that most users mentioned were the 12-hour effectiveness and the ease of use. Numerous users reported using this product when hiking in a dense forest where biting insects can be overwhelming. They typically reported being quite happy with the results when they finished their hikes without any mosquito bites.

As with any insect repellent, be sure to read all manufacturer instructions to use this product safely. You should smooth the lotion over any exposed skin before going outside. Again, 3M Insect Repellent should not be applied underneath clothing. You should also take great care when applying around the face. Always avoid placing the lotion near the eyes, nose, and mouth as this could cause irritation. Essentially, you should follow the same guidelines for the spray. Several users mentioned only needing a small amount of the lotion in order for it to work appropriately. Many biting insects like mosquitoes use these receptors to help them locate a host by detecting the carbon dioxide that we exhale.

DEET has been proven to repel numerous insects effectively, but the way it works has been questioned over the years. Initially, it was thought that DEET worked to block receptors for a specific chemical that is in human breath and sweat. Many biting insects like mosquitoes use these receptors to help them locate a host by detecting the carbon dioxide that we exhale. With these receptors blocked, mosquitoes would be unable to follow the scent trail that would lead it to a person.

However, recent studies have debunked this widely accepted theory. These studies showed that mosquitoes avoid DEET with and without the presence of carbon dioxide. A series of behavioral tests suggested that DEET is, in fact, a true repellent in that mosquitoes genuinely hate the smell and avoid it.

Repel 100 Insect Repellent and 3M Ultrathon are formulated with the same active ingredients and are intended for the same types of use, but are actually quite different. Perhaps the most noticeable difference is that Repel 100 is in a liquid form that you can spray on exposed skin and outer layers of clothing. Repel 100 is available in a 0.475 ounce, 1-ounce, and 4-ounce bottle whereas 3M Ultrathon is available as a lotion in a 2-ounce bottle or a 6-ounce aerosol spray. Repel 100 is formulated with 98.11% DEET compared to 3m’s 34.34%. Both products have overwhelmingly positive reviews and are highly effective. 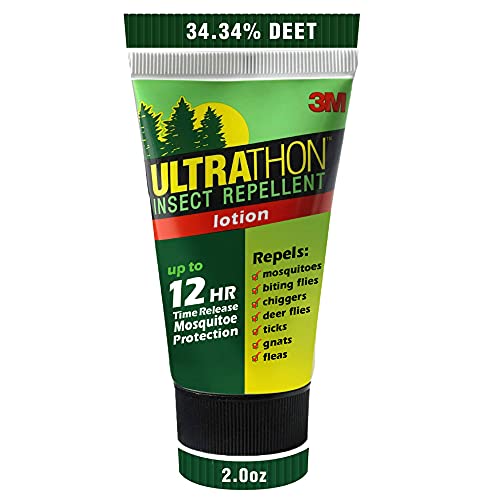 Ultrathon Insect Repellent Lotion with up to 12 Hours of Time Release Protection (Pack of 3)
$20.23
Buy on Amazon 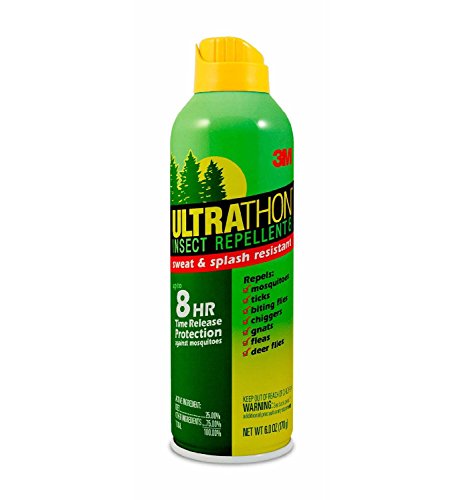