Adams Plus Flea and Tick Shampoo with Precor, Flea Treatment for Cats and Dogs, Value Pump 24 Ounces
Best Shampoo
$17.02
With up to 28 days of flea growth inhibitors, this is an excellent alternative to monthly treatments.
Buy on Amazon

Adams Plus Flea and Tick Spray for Cats and Dogs, 32 Ounce
Best Spray
$21.09
If you need rapid treatment on your pet, this spray kills fleas and ticks on the spot.
Buy on Amazon

How We Found the Best Dog Flea and Tick Prevention Products

You may think of fleas and ticks and a nuisance but not a serious enough problem to worry about. However, fleas and ticks pose serious health risks such as Lyme disease, various fevers, and even plague to both you and your pet.

Once a flea infestation invades your home, it can be a daunting task to remove them and often requires harsh chemicals. Rather than dealing with ectoparasites in your carpet or risking contracting illnesses such as Rocky Mountain Spotted Fever, we’ve rounded up the best flea and tick prevention products for your beloved pet. 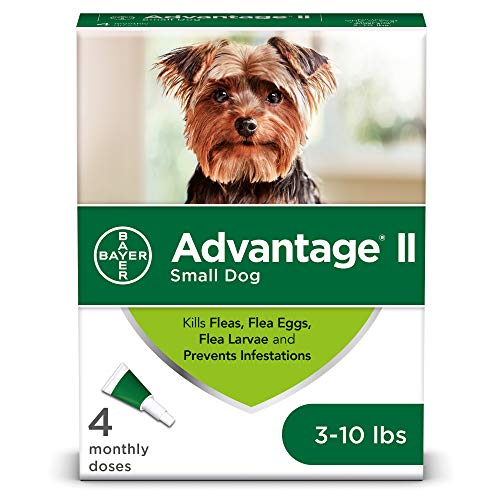 The Advantage II Topical Flea Treatment is an easy-to-use mini tube that you apply on the skin of your canine between their shoulders at the base of their neck. It comes in sizes for dogs 3-10 pounds, 11-20 pounds, 21-55 pounds, and over 55 pounds.

This monthly treatment also kills lice, which is a nice bonus. However, this does not kill ticks. If fleas are your biggest concern and ticks are not an issue where you live, this is an excellent all-around flea treatment and prevention. 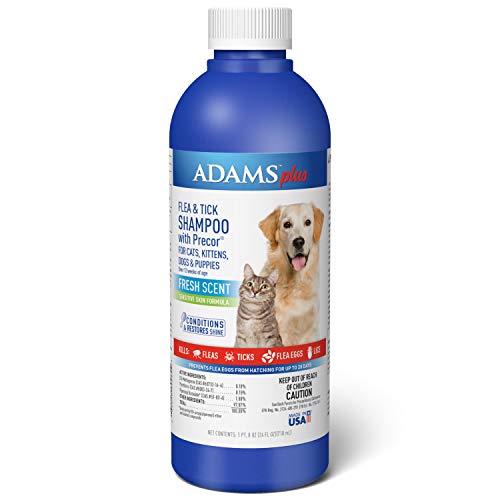 Adams Plus Flea and Tick Shampoo with Precor, Flea Treatment for Cats and Dogs, Value Pump 24 Ounces
$17.02
Buy on Amazon

Adams Plus Flea and Tick Shampoo with Precor is a concentrated shampoo with a thick lather that is infused with coconut extract, oatmeal for itch, lanolin, and aloe to soothe skin. This flea shampoo gives your dog’s coat a soft feel and beautiful shine. The shampoo removes flaking dandruff and soil.

PRECOR is an insect growth regulator that provides up to 28-day-control of pre-adult fleas. It kills fleas before they grow into biting, potentially disease-spreading adult ectoparasites. It’s best to spot test this on your pet before entirely bathing them in the shampoo.

Adams Plus Flea and Tick Spray for Cats and Dogs 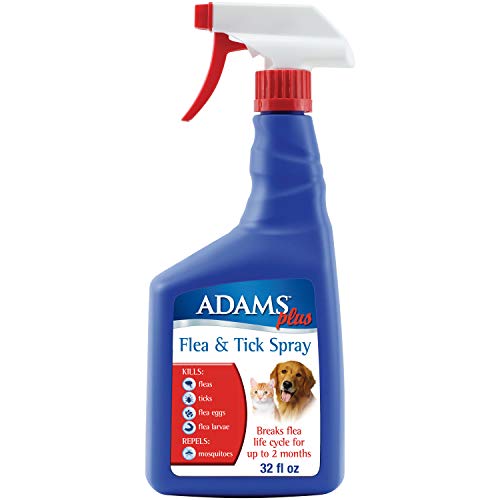 Adams Plus Flea and Tick Spray destroys adult fleas, their eggs, larvae, as well as ticks. This spray also repels mosquitoes. If flea eggs and larvae are sprayed with Adams Plus Spray, they will not grow into biting adults.

This flea and tick spray blends the adult flea killing ingredient of etofenprox with the long-lasting egg-eradicating ingredient of S-Methoprene Insect Growth Regulator. This combination of flea treatments delivers rapid relief from both biting fleas and ongoing destruction of eggs, breaking the flea life cycle. Adams Flea And Tick Spray For Cats And Dogs Review

END_OF_DOCUMENT_TOKEN_TO_BE_REPLACED | Updated for 2020Overall Rating: ProsLong-lasting protectionRemoves the need for any other treatmentsKills bugs before they can bite ConsCan cause allergic...

END_OF_DOCUMENT_TOKEN_TO_BE_REPLACED 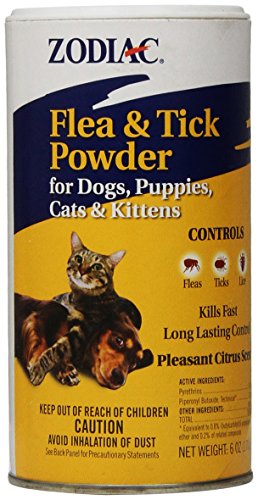 Zodiac Flea and Tick Powder for Dogs, Puppies, Cats, and Kittens is not only an excellent powder for use dusting pet bedding or rugs infested with fleas, but it can also be used in your lawn areas where these pests are most likely to live. Pets often rest in protected, shady areas outdoors, and those are the same places those tiny insects like to infest when outside.

If you can’t stand sprays and want a flea treatment that you can spot test, unlike potent once-a-month products, this is a fantastic option. This powder also kills lice infestations and ticks. 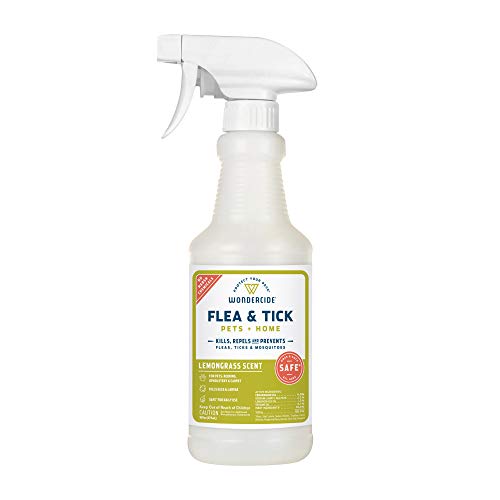 Wondercide Flea and Tick and Mosquito Spray is an excellent all-around product, especially if you’re worried about toxins. This non-staining spray can be used on pet bedding, furniture, carpet, in the yard, in insect hiding spots, and on the fur of both cats and dogs.

It’s best to spot test before using this all over your dog or cat’s body. Remember never to spray directly in the face and avoid eyes. Spray in a ventilated area to prevent your pet’s sensitive sense of smell from being overwhelmed by the scent of essential oil.

Adams Flea And Tick Spray For Cats And Dogs Review

END_OF_DOCUMENT_TOKEN_TO_BE_REPLACED

| Updated for 2020Overall Rating: ProsLong-lasting protectionRemoves the need for any other treatmentsKills bugs before they can bite ConsCan cause allergic...

END_OF_DOCUMENT_TOKEN_TO_BE_REPLACED

Preventing fleas with sprays, powders, monthly treatments, or preventative shampoos can be far less hassle than dealing with hundreds of insects taking over your home.

How the Active Ingredients Work

Pyrethrins are a blend of six chemicals that are highly toxic to insects. They are found naturally in some chrysanthemum flowers. Pyrethroids are a type of man-made pesticides comparable to the natural pesticide pyrethrum or pyrethrins.

Etofenprox is a man-made pyrethroid which that disrupts nerve impulses in insect nerve axons and was proven highly effective even in tropical environments.

Cedar oil blocks octopamine, which is needed to regulate heart rate and metabolism in ectoparasites like fleas and ticks. A mosquito study conducted in Thailand found that lemongrass essential oil at 10 percent concentration killed 100 percent of these three types of species of mosquitoes within 24 hours of exposure. Citral is considered the primary component of lemongrass with biological effects on insects.

The Risk of Ticks and How to Prevent Them

Ticks attach to animals via their mouths. There are several illnesses associated with ticks, not only for your pet but that also pose a threat to you.

Most often, ticks carry the illness Lyme disease. Both people and animals can get Lyme disease through bites from ticks. Symptoms most often include fever, excessive fatigue, headaches, and a skin rash. Untreated, Lyme disease may spread to you or your pet’s joints, heart, and nervous system.

Especially in specific regions, ticks can be a problem even within your own backyard. Keeping a barrier between your lawn and any forested areas can also help prevent tick infestation on your property. Gravel, a pebble moat, or mulch can be used between woodlands to minimize tick migration. Treating your property with tick-repellant sprays or powders is an extra safety measure.

Fleas and Their Risks

Fleas are wingless insects pose numerous health risks. When bitten, you will often see a small reddened spot encircled by a red halo, typically without much swelling with fleabites. Persistent scratching can result in patches of hair loss or irritated skin.

Research shows fleas can spread a typhus disease in humans. If the fleas fed off of infected rodents, in some areas, they even pose the threat of plague. Even in the United States, bubonic plague is a threat, particularly in the west.

Some people and pets suffer from allergic dermatitis via fleabites. Allergic Dermatitis is distinguished by acute itching, hair or fur loss, inflamed skin, and sometimes secondary infections. It takes just one tiny flea bite to start an allergic reaction. Itching can last nearly a week after the bite occurred.

Once fleas take root in your home, eliminating them requires an intensive program to destroy the infestation. Ridding your house or apartment of fleas necessitates steps that include zealous vacuuming, high-temp washing of clothes and sheets, terminating fleas on pets with various medicines and shampoos, and if needed, treating shaded outdoor places where your pets rest.

Preventing fleas with sprays, powders, monthly treatments, or preventative shampoos can be far less hassle than dealing with hundreds of insects taking over your home. Not all methods will work for all pets and pet owners. However, with the listed options here, you’re bound to find something that works for you and your dog—whether it’s monthly prevention or an all-natural, eco-friendly spray.