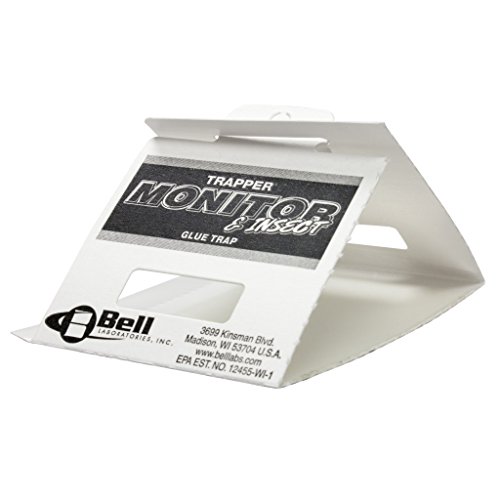 How We Found the Best Traps For Spiders

Traps For Spiders We Reviewed:

Not many things can conjure as much fear and angst as spiders.

These feelings are justified, given the fact that some can bite and cause severe health issues. However, they are harmless for the most part and will not try to bite unless disturbed with few exceptions. You may see them on their own, but spiders typically are a sign of other issues too.

Often they are an indication that you have other insect pests in your home since they’ll seek food sources where they linger. The traps provide an effective way to manage both spiders and their prey. There are numerous options available to help control an issue. They work similarly with different sizes and shapes from which to choose.

Our Top 4 Best Traps for Spiders 2019 review includes the products that will work to rid your home of these arthropods. Keep reading to learn more about them and the ways to maximize their usefulness.

Terro T3206 Spider & Insect Trap are essentially covered glue pads that catch spiders and other insects that walk on them. They don’t contain any poisons, so they’re safe to use around pets and children. Their smaller size makes them easy to tuck them in out-of-the-way places for discreet use.

Terro is one of 13 brands of the parent company, Woodstream Corporation which specializes in pest control of all types. It is a trusted name in the industry whose history goes back over 100 years.

Traps Direct 45 Insect & Spider Traps stands out as an economical solution to a vexing problem. The package includes more than enough of them to treat your entire home. They offer a more tactful way to deal with a pest issue with a design that doesn’t draw attention to itself. They come flat in the pack. You can fold them in a triangle or rectangle shape.

Like the previous product, they are glue traps. They also include bait to attract more pests to them faster.

Bell Trapper Insect Traps are 7 x 3-inch glue pads that you can use as-is or separate into three parts to fit the space where you need to place them. They are incredibly sticky and capture pests easily. They are value-priced, making them an ideal solution if you have a more severe problem. 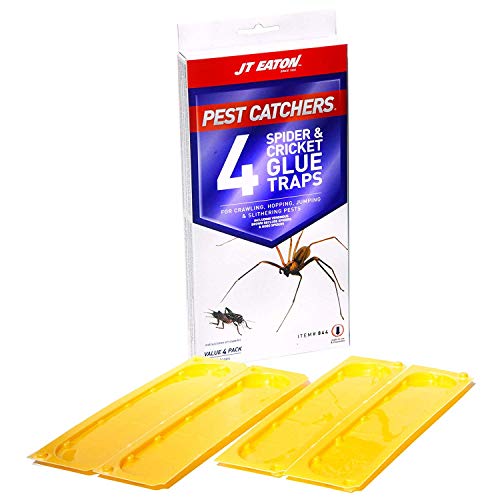 JT Eaton 844 Pest Catchers is the costliest of the products we reviewed but the only one with a warranty. The glue is sticky enough to catch small rodents too. The narrow shape makes them an excellent choice for tight areas where you need some protection. They are scented to increase their usefulness with a non-toxic solution.

The manufacturer makes a whole line of pest control products including those for professional use. The traps are sturdy and well made which helps justify their higher price tag. The glue is non-drying and will last as long as you need it.

How To Get Rid Of Spider Mites

END_OF_DOCUMENT_TOKEN_TO_BE_REPLACED

Learn how to identify them if you live someplace where these spiders occur. Make sure your children know what they look like too to play it safe too.

Are All Spiders Dangerous?

Rest assured that spiders pose little risk to you or your family. They are not aggressive like some insects. Most bites occur from a chance encounter of one. However, that said, there are two species which can cause health issues. They include the brown recluse and black widow spiders.

The former’s name is appropriate, given its elusive nature. You’ll find them in places where there is little disturbance. The latter is especially dangerous, but it hasn’t caused any fatalities in the United States. The wolf spider also can bite, but it isn’t as much of a concern as the other two.

Learn how to identify them if you live someplace where these spiders occur. Make sure your children know what they look like too to play it safe too. It can also allay their fears of them if they understand that most are harmless.

Many people are scared of spiders, a psychological condition known as arachnophobia. Often, a traumatic incident as a child triggers it and persists into adulthood. Some researchers postulate that it has an evolutionary basis as a primitive survival strategy. At one time, avoiding unknown things in your environment meant the difference between life and death.

Others suggest that its origins are more recent from the Middle Ages when the plague caused widespread deaths. People linked the two which may have led to this association with danger and bodily harm.

However, by and large, spiders pose little risk of danger other than the venomous ones we detailed above. Avoidance is the best strategy when dealing with them. If they’re in your home, you have several options to get rid of them.

Spider traps come in various sizes. They may or may not contain insecticides or attractants. Many work merely by trapping the pests with no chance of escape so that they eventually starve. For the best results, put them where you’ve seen them or evidence of their presence such as webs. Bear in mind that not all spiders spin them.

These products will catch and kill them along with other insects. However, it’s likely an ongoing issue that you’ll need to control. It’s easy for them to get into your home, given their small size. Using the traps can keep the problem from escalating into something more serious.

You’ll find them most often in multi-packs with several traps included for the price. They usually are enclosed to lure pests to them. That also makes your job easier and less unpleasant. They have a simple design and are disposable. One of the best things about them is their cost. They are inexpensive for an affordable way to control these pests.

How Can I Prevent Spiders From Getting Into My Home?

The best way to manage them is through prevention. Seal any holes or leaks in your foundation and around areas where utilities enter the structure. Repair any damage to screens. Also, you may find it helpful to install weather stripping around your exterior doors. Spiders aren’t unlike other pests like mice which will seek warm places—including your home—when it gets colder.

They feed primarily on other insects. By getting rid of them, you’ll remove a reliable food source that may attract them to your home in the first place. They are opportunistic and will seek out the resources they need to survive. Keep your kitchen and other food prep areas clean to avoid luring their prey to your dwelling.

Sometimes you’ll get spiders in your home inadvertently as hitchhikers on other items you bring into your home. You’re most likely to find them in dark areas where they prefer to hide.

First, spiders are not insects but instead another distinct order of organisms. They have eight legs and two body segments, unlike the latter which has six and three, respectively. They are predators which will take insects and even other spiders as prey. As we detailed above, not all of them are harmful no matter what their size.

And you can rest assured knowing the rumor that the average person swallows several a year in their sleep is just an urban legend with no basis in fact. However, while they’ll kill other insects, getting rid of them is the surest way to restore your peace of mind.